"The Motherfucker with the Hat" at SF Playhouse 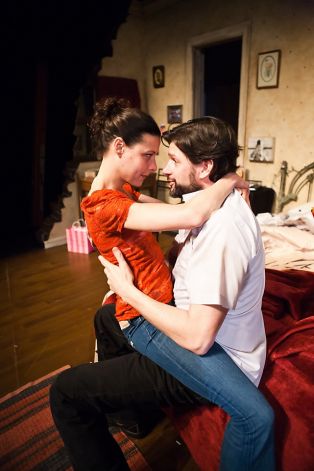 Isabelle Ortega & Gabriel Marin in "The Motherfucker with the Hat"


Today I went to see "The Mother Fucker with the Hat," by Stephen Adly Guirgis at SF Playhouse's gorgeous new theater at 450 Post, San Francisco.

The audience was eclectic, multi-cultural, and spanning an age range not to be believed. What other theater gets 20 somethings and 70 somethings at the same play? The guy next to me periodically checked his cell phone and wore a baseball cap, he was about 19. I thought it best to let him be.

The theater is inside the sumptuous Kensington Park Hotel, just off Union Square. The lobby is huge and concessions are  at the ready with mouth-watering delights.

Yes, it's safe to say that husband and wife team Bill English (Artistic Director) and Susi Damilano (Producing Director)  have scored a total home run in acquiring this new wonderland of a theater space. If I said I wasn't jealous I'd be a total liar.

We walked in and I gasped at the set, which had four separate, fully realized sets within one set. The details were perfect, as was the lighting. Sound Designer Ryan Lee Short, who started his quick and well-deserved ascent with my company, Virago Theatre, did an exquisite job. The sizzling bbq made my stomach growl. Right on, Ryan.

Now on to the show. Expertly directed by Bill English, at a lickety-split pace to die for, the fine all-Equity cast is Rudy Guerrero, Margo Hall, Carl Lumbly, Gabriel Marin, and the lovely Isabelle Ortega. I know Isabelle from Shakespeare at Stinson, where Bob Lundy-Paine played Andrew and she played Olivia. She was mesmerizing then and still is.

The show itself is fully realized, every moment is found, every beat unfolds.

I left after the 1 hr 45 show and walked to the Powell Street BART. And was tremendously sad.

This show is about people with deep personal flaws. Not the sexy kind like Carrie Mathison on "Homeland." The kind that makes you squirm in discomfort and want to turn away but can't. These are people who hurt other people but keep acting like that's just the way life is and get the fuck over it. Oh yes, everyone says fuck. Over and over.

The main character, Jackie (Gabriel Marin) is attempting to stay clean and sober after leaving prison. But everyone around him lies, cheats, and screws everyone else over behind their back. And says get the fuck over it.

Except Julio. God how I loved this character, this actor, this release. I'm not even sure he says fuck. Rudy Guerrero is Julio, Jackie's cousin, the one pure, unselfish character. Julio was once left in the dust by Jackie when they were children, and growing up Jackie virtually ignored him,  but he never held a grudge. Now he cooks for Jackie, hides Jackie's gun for him, and goes into Van Damme mode when Jackie needs him to. The script manages to insert every stereotype in Latino culture in Julio's character,  but Guerrero remains grounded and completely real. Ultimately we see that Julio is the only pure character in the play.

Carl Lumbly as Jackie's two-faced sponsor Ralph is the biggest heartbreaker, because we grow to love his dedication to a sober lifestyle full of fresh discoveries at age 50, like surfing and French lessons. "You can only make friends until you're 25," he tells Jackie once the gloves are off. "Everyone after that is just an acquaintance."

I find it disheartening to think that perhaps those I trust and go to for love, support, and friendship are. . .fucking me behind my back. So to speak.

SF Playhouse is a tornado with a vortex you are going to want to get sucked into. Just remember, you're going to feel something when you see a show there. It might hurt. It might not. You'll have to jump in to see. I tend to think that's the plan.